Ammonia fuel in the maritime industry

In my private opinion, ammonia has a much bigger chance to become fuel for the maritime industry. For ammonia, there are also possibilities to become a green alternative fuel. A lot of maritime companies, including Maersk are developing safe procedures for ammonia. In this article, I will try to describe to You why ammonia is under bigger interest than Hydrogen (described in the previous post here!), by maritime companies.

What ammonia really is?

Ammonia is a pungent gas. It is used widely to make agricultural fertilizers. Green ammonia production is where the process of making ammonia is 100% renewable and carbon-free. Currently, blue ammonia is produced from the byproducts of current and ongoing petrochemical industries. That is why ARAMCO is the company pioneering the creation of this new fuel source but blue ammonia is simply a stepping stone to green ammonia.

Most of the world’s ammonia is synthesized using the Habar-Bosch method. This method is not environmentally neutral, however, these processes are under development at the moment. You can find concepts of blue and green ammonia below.

As You can compare with the previous article which describes hydrogen, ammonia has a much higher density as a fuel. This reduces the costs of storage because ammonia requires only -33°C in comparison to -253°C for hydrogen is really a huge advantage. I think this is quite clear, that it is much easier to reach -33°C than -253°C. So You save energy during liquify process and later on during storage and transport. Another advantage is space. Liquefied ammonia has a 1.7 higher density than the liquefied hydrogen. If we reduce a little bit of pressure, then the required temperature will be much lower. So under pressure, we can store ammonia in some -20°C, which is already a good starting point.

This is an old process, which was invited around 1910 by Fritz Haber and Carl Bosch. From natural gas, with the use of steam, we separate hydrogen and from air separation we take nitrogen. We connect them in high-temperature and high-pressure environments. In that way, we receive industrial ammonia. You can find it in literature as Gray ammonia. This shows that ammonia is with us already for some time. We just have to standardize the new use of this chemical substance.

At the moment, ammonia is well known mainly as fertilizer. However, ammonia can be consumed for ammonia power plants. Ammonia is easy for transportation in comparison to hydrogen, because of the difference in liquify. (-33°C vs -253°C). This process isn’t carbon neutral. That is why we have a concept of blue and green ammonia fuels.

Blue ammonia is potentially a new source of energy. This whole concept is relatively new. This solution is something in between industrial and green ammonia. Blue ammonia contains byproducts of current fossil fuel production. Ammonia is in 18% hydrogen. Blue ammonia is created from harvesting hydrocarbons and converting them into hydrogen and ammonia. That mixture is ready for burning in power generation plants.

The key here is that the blue ammonia does not let off any carbon dioxide when it’s burned. Leader in blue ammonia is Saudi Arabia’s company ARAMCO. ARAMCO claims that it traps nearly all CO2 generation during the conversion process. This makes this fuel one of the first carbon-free options for mass use.

Currently, blue ammonia is made from the byproducts of current and ongoing petrochemical industries. That is why ARAMCO is the company pioneering the creation of this new fuel source but blue ammonia is simply a stepping stone to green ammonia.

Finally, we reach a final concept. Green ammonia is almost the same as blue ammonia. The main difference is, that green ammonia is made with hydrogen that comes from water electrolysis powered by alternative energy. This kind of project starts to come around all the world. A massive project in Saudi Arabia that aims to make more than 1 million metric tons of ammonia per year! Saudi Arabia is a big player in the fuels market. So I expect they like to keep their position for “green fuels” as well.

If we can continue to diversify our power generation methods and create more and more renewable and green energy, the potential rises that we can perfect a method of green energy that produces hydrogen and ammonia as a byproduct giving us a completely clean and safe power cycle.

Several government-supported projects are also in Australia. For example, the Norwegian fertilizer maker Yara intends to install electrolyzers to make 3,500 t per year of green ammonia at its plant in Pilbara, and the ammonium nitrate explosives makers Dyno Nobel and Queensland Nitrates are studying 9,000 and 20,000 t of green ammonia output, respectively. Pilot programs are also underway in New Zealand, Chile, and the Netherlands.

So this is really tricky to say, what is better, ammonia or hydrogen? It is possible, that ammonia and hydrogen will grow together. This is definitely not a fight between these two solutions. Hydrogen definitely will take a place ashore. However, ammonia is much easier to be handle in the maritime environment. Both solutions still need to become standards. They are relatively new concepts. However, both are supported by governments and private sectors.

I am really waiting for Your opinion! Which fuel is the future in Your opinion? Do You think that ammonia will be the fuel of the future or there will come some new other development?

Hi Ali!
Some weeks ago I have created a poll on LinkedIn about alternative fuels. I am just presenting the advantages and disadvantages of all. Also, DNVGL, Lloyds, Bureau Veritas, and others are working on the standardization of these solutions, so I think it is good to describe this subject from my point of view. I think it’s good that people be aware of the solutions, which are coming to the market in next years.

Privately, for me, the best solution for maritime industry are micro-nuclear systems. What are your thoughts?

[…] subject of green fuels is still under discussion in many places. We introduced already ammonia and hydrogen. However last week pops up information about Maersk and their order of 8 carbon […] 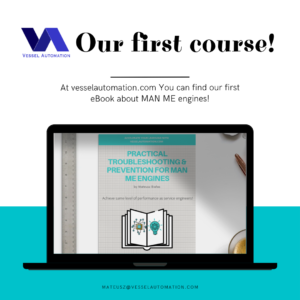